When a devastating injury sidelined writer James Clear from playing baseball in high school, he didn’t return to the field immediately. Instead, he gradually re-established order by doing simple things like going to bed early, tidying his room, and lifting weights several days a week. Despite his injury, Clear eventually managed to make it onto ESPN’s Academic All-American team. That’s why he doesn’t believe in adages of extremes like “No pain, no gain.” He knows firsthand that even 1% improvements compound to more positive effects than most people may realize.

Inspired by his experience, Clear’s new book, Atomic Habits: An Easy and Proven Way to Build Good Habits and Break Bad Ones, introduces four guiding principles for making changes stick. We spoke with Clear about how that framework could be applied to building better, more productive habits at work. 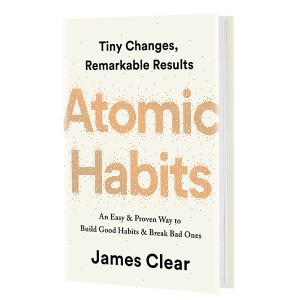 “A manager could think more carefully about which apps should or should not be on everybody’s desktop. What is something that everybody on the team needs to see each day when they open up their screen?”

Until new good habits become second nature, Clear recommends creating cues or reminders that are in plain sight. Conversely, adjust to things like app notification settings to reduce your exposure to distractions.

“A manager could think more carefully about which apps should or should not be on everybody’s desktop,” Clear says. “What is something that everybody on the team needs to see each day when they open up their screen?”

Recently Clear visited Sumo, an email software company with a goal of hitting 1 billion pageviews for its products across all the websites on which they were installed. Sumo tracked its progress with a live tally counter on one of its walls.

This live tally reminds Clear of something he wrote in Atomic Habits—that we imitate the habits of people close to us, along with those of “the many” (i.e., social norms) and the powerful. As he researched his book, Clear was struck by the outsize role that family, friends, and yes, coworkers could play in shaping our habits. “People will go to church for 50 years, which is incredible consistency, because their friends attend the same church or people who live on the same street ask, ‘Where were you last Sunday?’ if they were out of town.”

Sumo’s tally counter is inherently motivating for the same reason. “Visual cues help get everybody aligned and speak to the importance of social reinforcement in habits,” Clear says.

Establishing a new good habit shouldn’t feel like an enormous task, especially at first. Clear has a simple two-minute rule to help banish procrastination. “The key is that you focus on the first two minutes of your behavior,” he says. “ ‘Doing yoga five days a week’ becomes ‘Take out your yoga mat.’ You’re building up the habit of showing up and letting the rest fall naturally.”

That said, a business should still set goals. “Goals aren’t useless—they provide clarity and a sense of direction,” Clear says. “But the first question that needs to be answered is, What are the principles and values that are important to us? Once you figure that out, you let that determine habits and measurements like metrics.” Have faith that systems built off good habits will drive progress forward.

“Self-control is a short-term strategy, not a long-term one,” he adds. “You may be able to resist temptation once or twice, but it’s unlikely that you can muster the willpower to override your desires every time.”

Creating a secondary reward (like getting a monthly massage) for a new habit (working out) can tide us over, at least until the intrinsic rewards (better physical health, reduced stress) kick in.

Clear also suggests using a habit tracker, because it establishes seeing the progress made as its own reward. Throughout December, Clear used his own Clear Habit Journal to track five daily habits: go for a walk every day, read one page, lift one set, log his workout, and write in his journal.

“What surprised me is I have never journaled. I have literally never had that habit,” Clear says. “But I journaled for 27 days in a row last month.”

Step-by-step guides to help you work better as a team and get more out of Slack—no matter what work you do.