[This post was written by our CEO, Stewart Butterfield, as soon as he was allowed to, following the end of our Q3 quiet period]

Shared channels are amazing. They bring all the benefits of moving from inbox-based to channel-based communication – the increase in transparency, in alignment, the shared history equally accessible to everyone regardless of when they join the project – they bring all of that to teams of people who are working across organisational boundaries.

Shared channels help sales teams close deals faster and lawyers serve clients better. They create more efficient relationships between marketers and the creative agencies they partner with. They help customer support teams deliver better service, they help consultants deliver projects faster and they help procurement teams working with many vendors in complex supply chains to improve productivity – the list of ways they help to get work done is very long, and growing every day.

Because of all that, shared channels have been an enormous hit with customers. As of 31 October, more than 26,000 companies have created more than 70,000 shared channels. Here’s a network map that shows how all those connections come together: 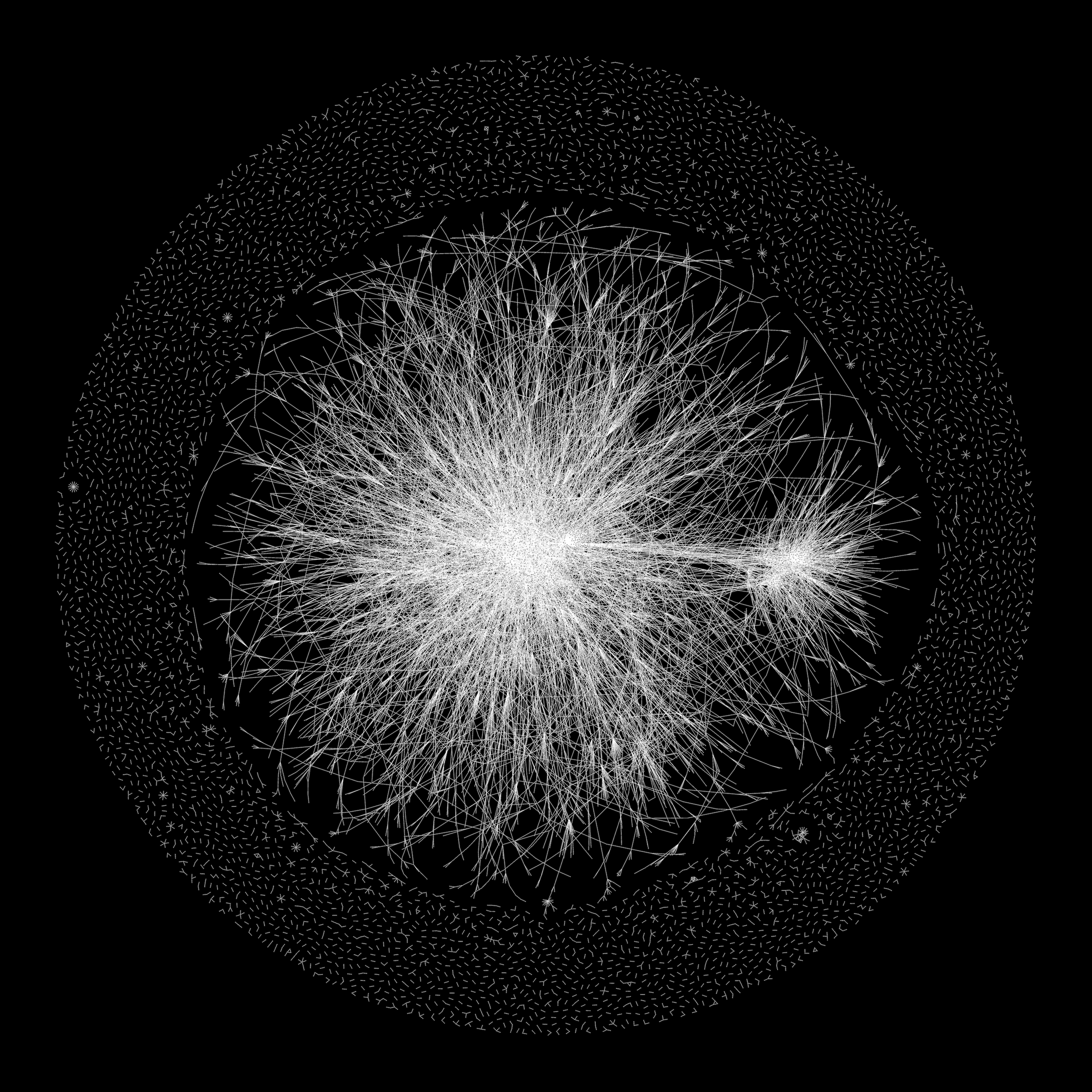 Pretty complex, eh? (Also: cool-looking.) This week, millions of messages will be posted by hundreds of thousands of users across a vast network of shared channels in 138 different countries around the world. But those summary numbers don’t really tell the whole story. So let’s break it down.

First of all, you’ll see there are two parts to the network. On the inside there is the “internal mega-network” (naming suggestions welcome). Every company in this group is connected to every other one by some chain of shared channels. It is very dense and looks like this: 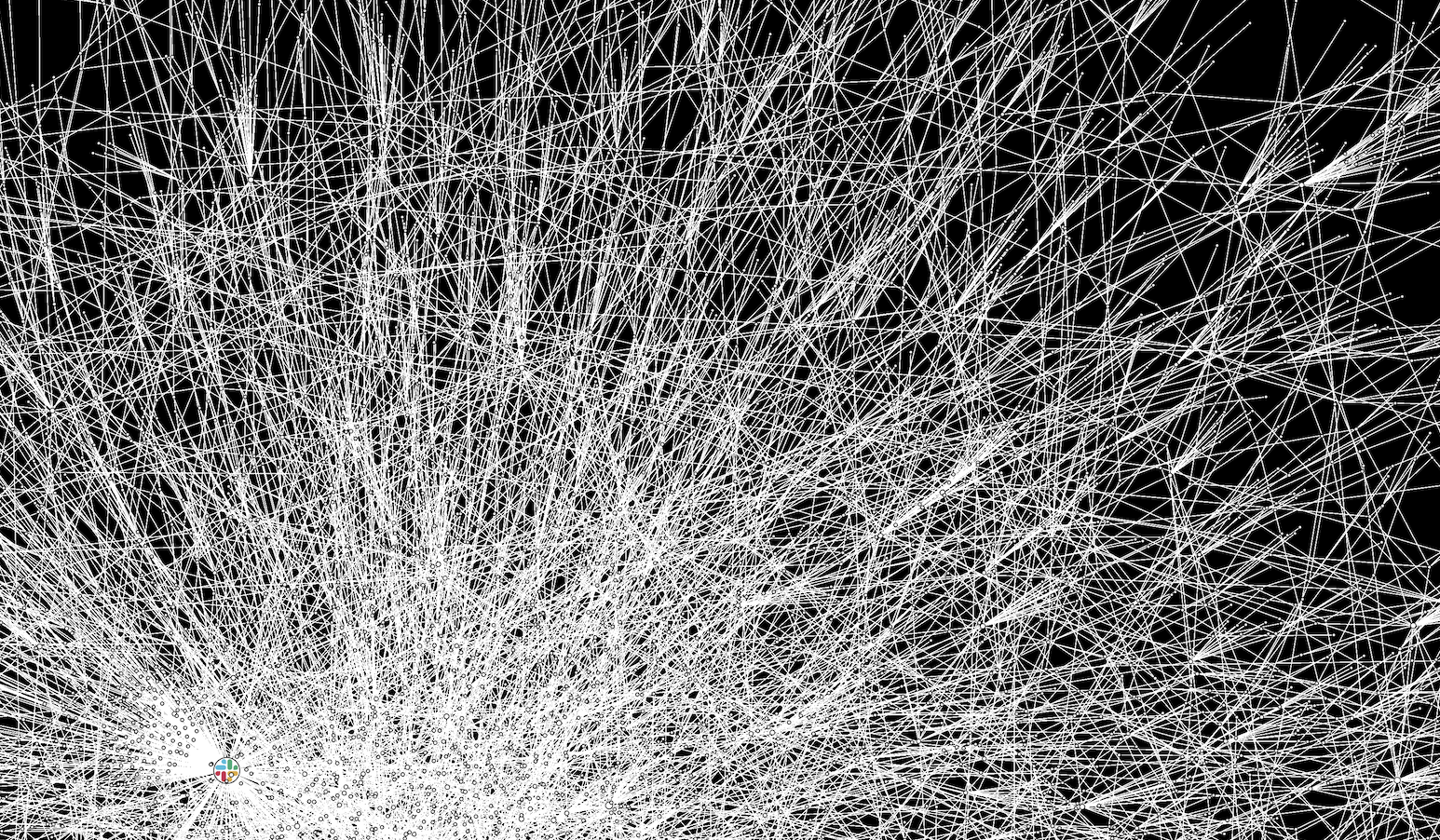 In the outer ring, you find a sea of floating “constellations” made up of mini-networks who have no connection yet to any of the organisations in the internal mega-network. It looks like this: 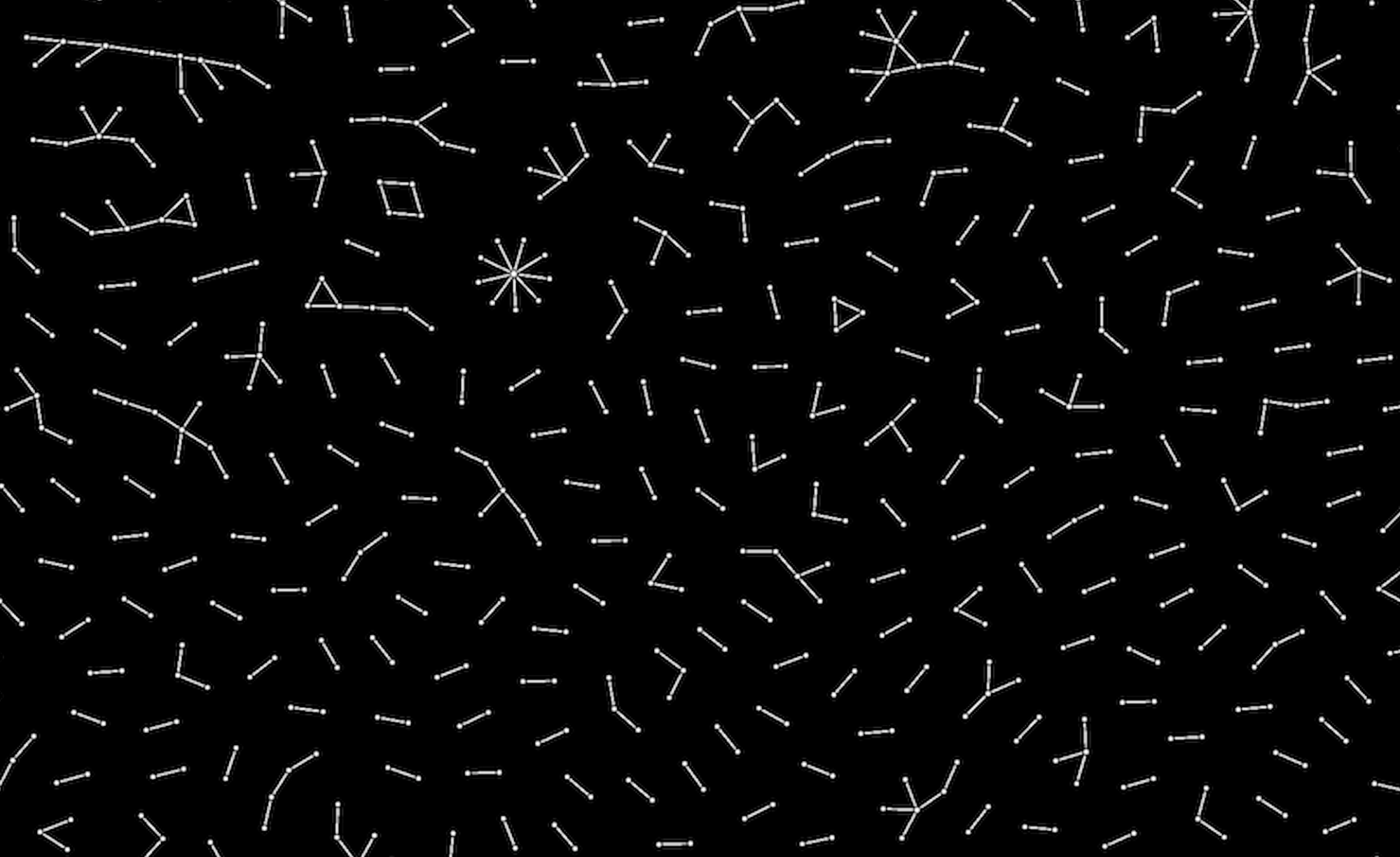 Like constellations in the night sky, these mini-networks have distinctive shapes (and we can’t stop giving them names like “trident”, “scoop”, “worm”, “twig” and “wheel”). On an hourly basis, new pairs are created, new constellations are born, and the existing shapes evolve as new organisations start using shared channels.

Also on an hourly basis, these mini-networks from the outer ring get sucked into the internal mega-network, as connections are formed between organisations on the inside and the outside. The overall result is a roiling sea of proto-networks surrounding an ever-expanding network of super-connected teams.

Of course, that’s just a way to try to visualise a massive transformation in how individual companies work together and, ultimately, how entire industries will reshape the way teams collaborate and work gets done. But in the meantime, again: it looks cool. And you can get a good sense of how the network has grown by looking at snapshots from different times.

First, have a look at the shared channels “pioneers” who were testing the feature in the very early days, just under two years ago: 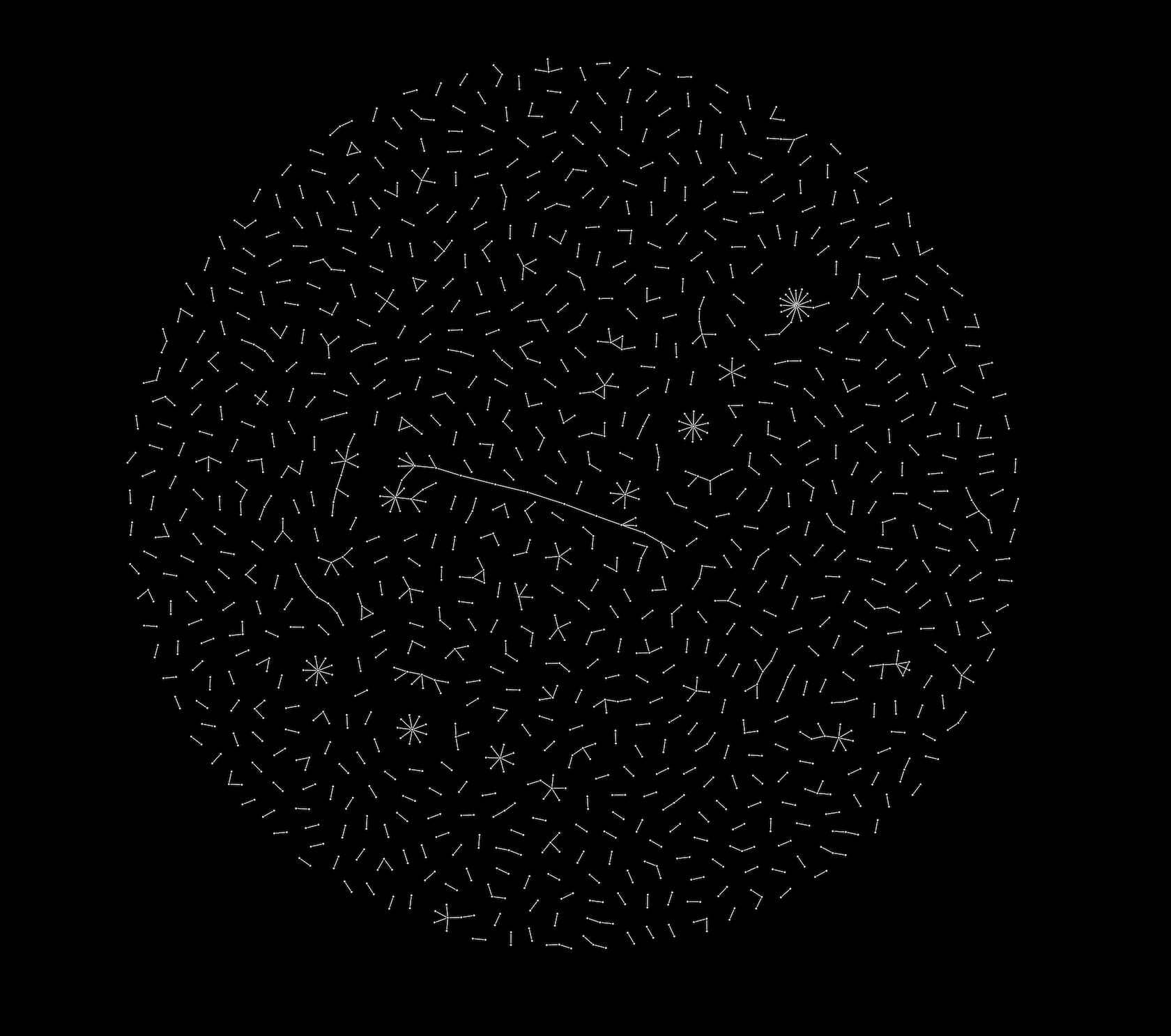 Six months later, with the official beta programme up and running, more teams were allowed in and the mega-network started to emerge as a core group of customers starting linking more tightly together: 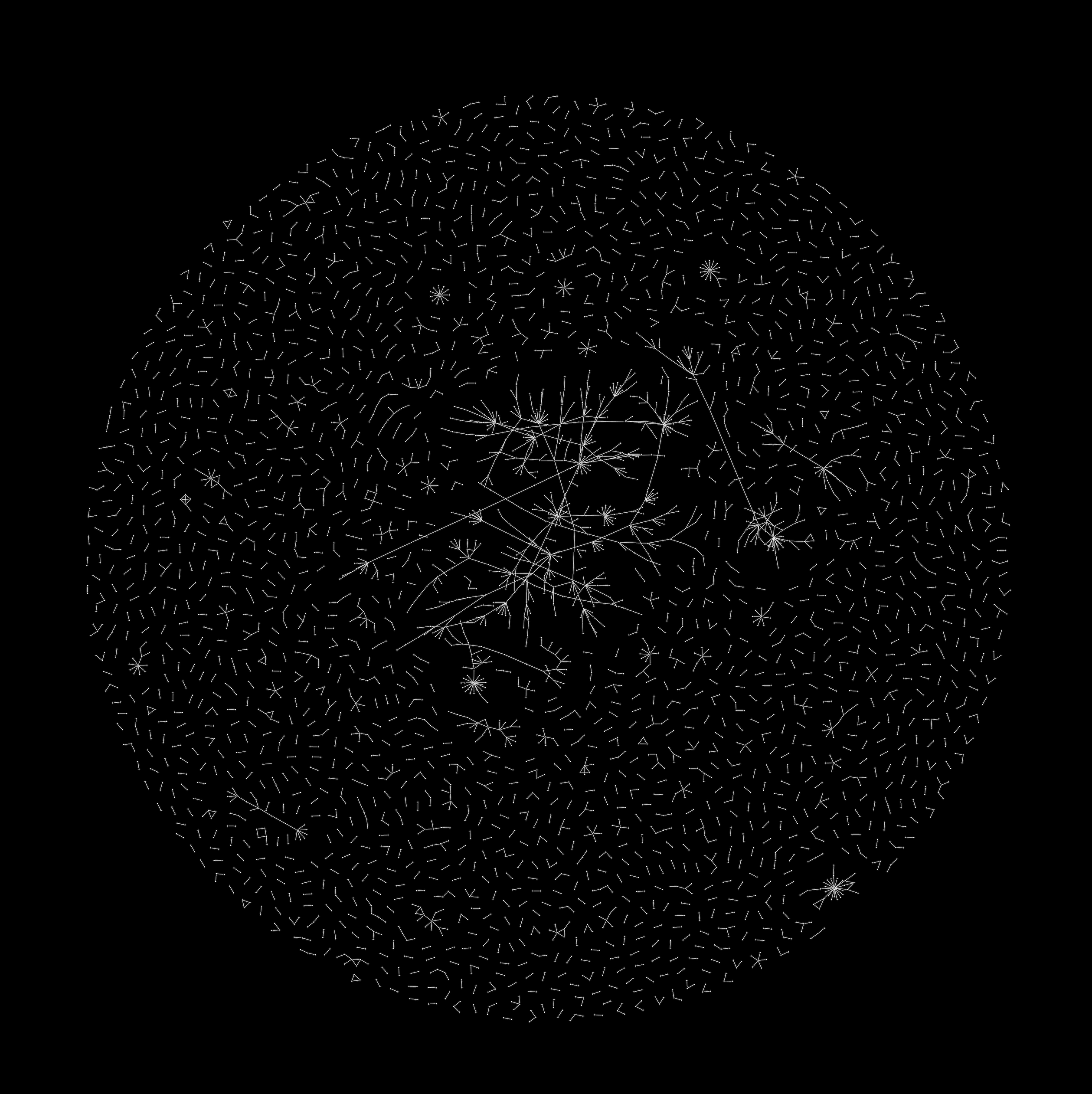 By the end of 2018, the number of companies in the network had nearly doubled and around a quarter of the teams were part of the mega-network and the network map started to resemble the current form: 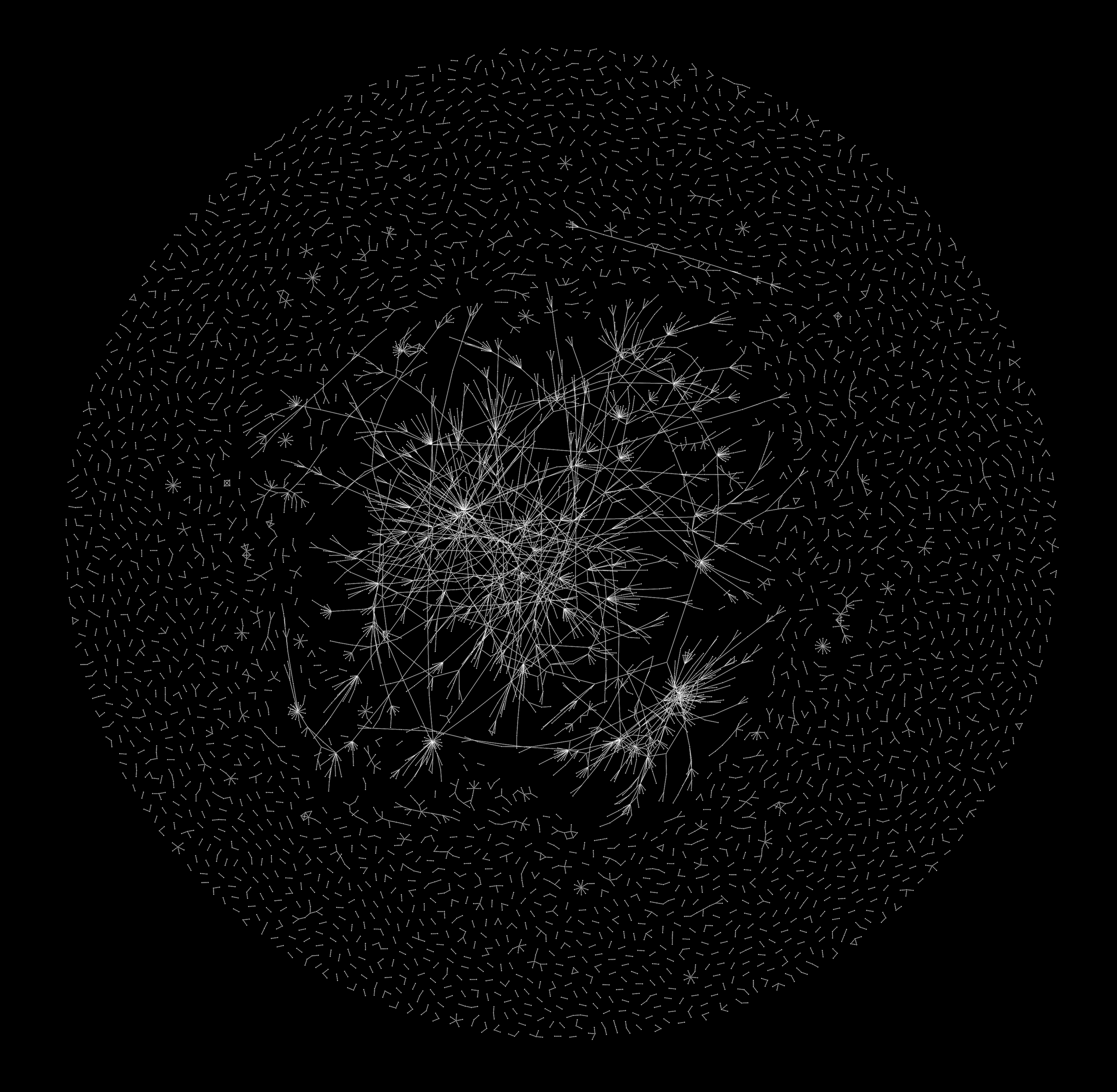 In early 2019, we started simplifying the setup process and began encouraging more organisations to participate (although the beta was not yet available to customers using our Enterprise Grid product): 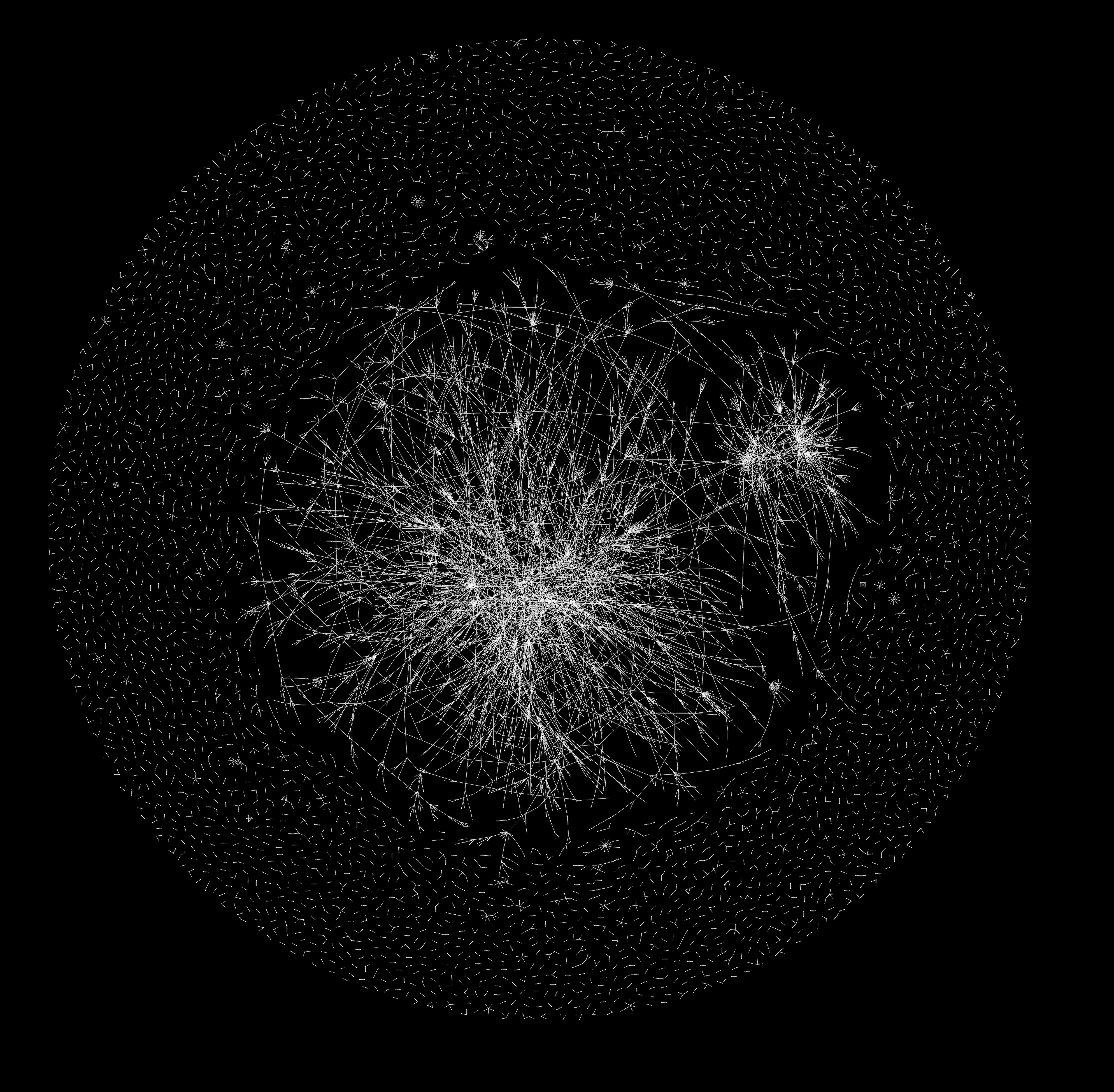 By 31 July 2019, more than two thirds of teams had joined the central network, we had started to allow Enterprise Grid customers to test shared channels and we were about ten weeks out from “general availability”, the official launch of the feature out of beta: 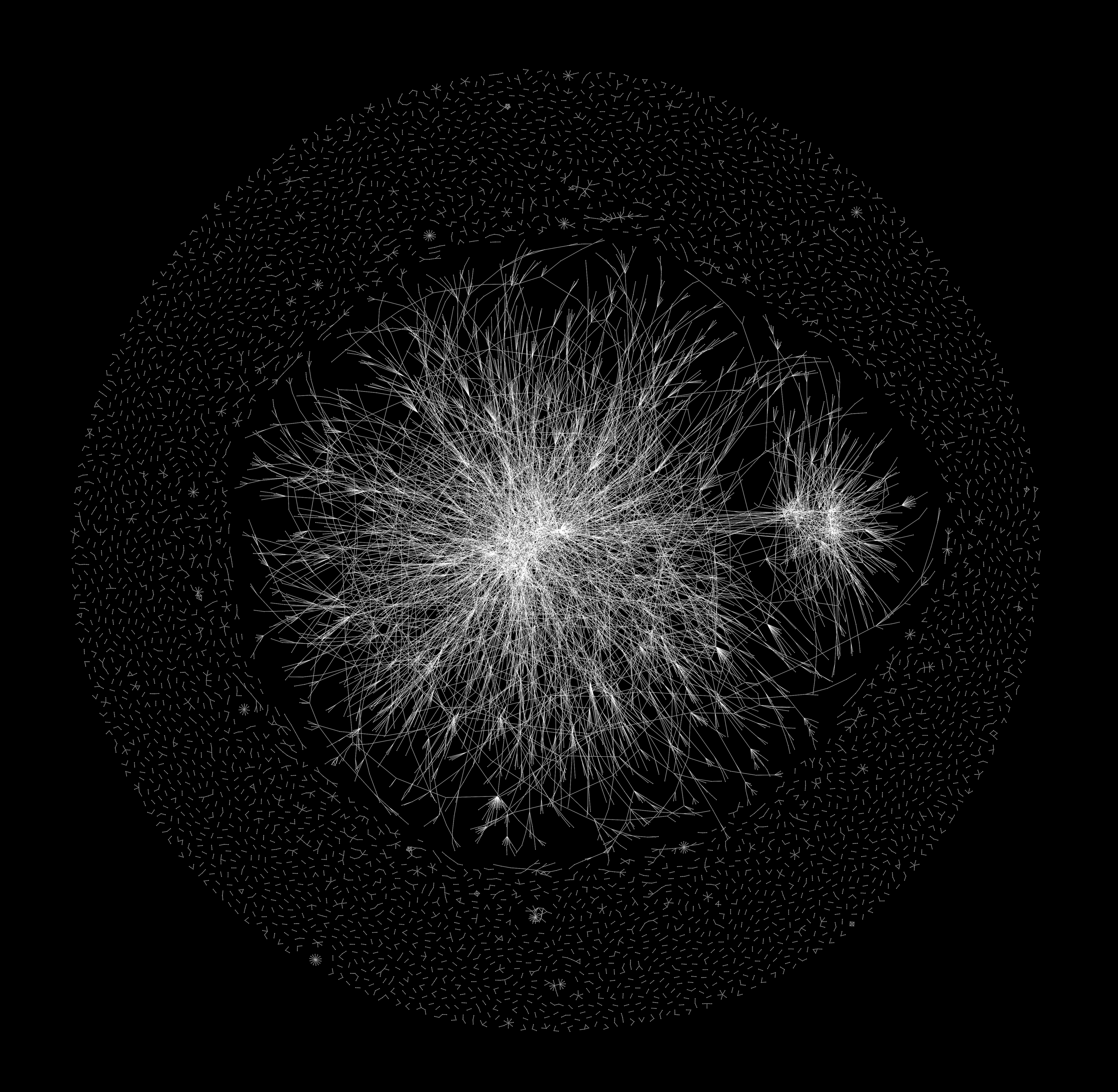 Finally, just before the end of our last quarter, six weeks after GA, usage began to explode and we’re back at the network map we shared at the beginning of this post:

Above: Over 26,000 organisations using shared channels and those organisations’ connections on 31 October 2019.

Zooming in, we can see all kinds of interesting phenomena begin to emerge. The big branch of the mega-network jutting off to the right? That’s our Japanese users who share much more frequently in-country than North Americans or Europeans. The “wheels” around the outside, once sucked into the mega-network, become the arrowhead wedge shapes jutting out of the centre. The number of connections between companies starts to grow even more quickly than the number of participants as customers begin finding new uses for shared channels.

But the network map only tells part of the story. The really interesting stories are being created through the connections among individual companies. For just one example, look at the “wheel” in the middle of this image:

The hub in the middle of that wheel, connecting to all the spokes, is an audiology software company called Smartcare.

Smartcare has changed the way they work with their customers through shared channels – and their customers love it. They are so happy about the results that they bring all new customers into Slack and even pay for those customers to use it.

The shared channel becomes the base camp for the entire relationship – from training and troubleshooting to customer support and product updates. Every communication is through shared channels: no emails and no phone calls.

Smartcare’s customers rave about the responsiveness of Smartcare’s small, but Slack-powered customer success team. Travis Topham, Smartcare’s co-founder and Head of Product, said, “Slack is so invaluable that we pay for our customers to be on it with us. It lets us efficiently take care of the administrative tasks, while we’re able to focus on ground-breaking work in our industry.”

Finally, while the network maps are fascinating for understanding how shared channels spread and the relationships between all the companies using them, it is also interesting to look at how they lay out on a map of the world:

While this visualisation ends up undercounting the total number of connections (because so many channels are shared between customers who are the same city as one another) this ends up being really beautiful. It’s like a map of global commerce as seen through Slack shared channels.

Here’s a bonus video showing their growth across the world during our beta period and the few weeks of general availability:

One last note: I’ve been making network-based software for a living for the last 20 years. Over that time I’ve worked on a lot of great projects directly, and have seen many more from the inside, as an investor, board member or just as a friend. I have never been more excited about a product or its product market fit than I am about shared channels.

For the entire beta period, people practically had to walk over broken glass to start using shared channels: for me to even send you an invitation, I’d first have to find out your “workspace URL” which very few people knew. Yet the usage kept growing, and customers kept inventing newer and more valuable uses.

The spread was truly viral: we saw that companies first introduced to shared channels by one of their vendors or partners went on to send invitations themselves to their customers or service providers (who then went on to invite more and more people, and so on). The feature was deemed so essential that some customers even delayed planned upgrades to Enterprise Grid until shared channels were added. The levels of satisfaction and recommendation are through the roof and we’re just getting started. I’ve honestly never seen anything like it.

And that’s why shared channels are so cool.

For more details about how to get the most out of shared channels, take a look at these additional resources: