Yesterday, Slack’s CEO and co-founder Stewart Butterfield shared a series of tweets chronicling the past few weeks inside Slack and the increase the company has seen in user engagement during the rapid global shift to remote work.

Here is the unedited text of those tweets (some of the numbers highlighted have since been updated here.)

My day job (also: night job) is CEO of Slack, a publicly traded company with investors to whom I am a fiduciary, 110k+ paying customers of all sizes, and thousands of employees I care about very, very much. The last few weeks have been [emojis showing exploding head, flushed face, crying face] Here’s what it’s been like.

Quick introductory note: I’m a human. I worry about my family and am deeply concerned about the millions whose jobs and health are at risk. But I’m also a CEO and these tweets are about work: the company, money, markets, customers, earnings, guidance, etc. With that in mind …

Week of March 2nd-6th
Monday: Fewer than 100 COVID cases reported in US, but uncertainty increasing. Over the weekend we shut down the Tokyo & Osaka offices, put travel restrictions in place and cancelled our annual Global Sales Offsite, a long-planned 800-person event.

I get an email from the CTO of one of the world’s biggest asset managers telling me (a) they’re signing the contract to go wall-to-wall on Slack and (b) this was one of the last big purchases before tightening up due to coronavirus concerns. First time I’d seen that in the wild.

Tuesday: Announced “optional WFH” at all other offices globally. A few other companies had also started or were considering starting WFH programs amid growing uncertainty. We noticed upticks in new teams signing up for Slack, especially in Japan, Korea and Italy.

Wednesday: Things speed up. We launch a set of resources for teams that are faced with the prospect of a sudden shift to remote work, began offering free 1:1 live consultations and created new webinar programs in response to growing demand. (See: https://twitter.com/stewart/status/1235613239322374144)

Thursday: Board meeting. Debated and approved plan for this fiscal year— hiring, budgets, targets, forecasts, etc. Got feedback on our prepared remarks and guidance for next week’s earnings call; felt confident! Didn’t know it, but for most, our last meeting in the office.

Thursday (cont.): An SF-based employee informs us that they’d been contacted by the CDC about a potential SARS-CoV-2 exposure. Decided to close HQ the next day and do a deep clean over the weekend. (The employee had no symptoms and was self-quarantining. Now okay, thankfully.)

That evening policy discussions intensified. Reported cases in the US up to 200. News was getting worse. The exec team debated what global office closures would look like, backchanneled to other leaders, and began preliminary planning. All this seems a different universe now.

Friday: Made the call. “Strongly encouraged” all employees to work from home. Planning intensified. There was a LOT of work to do. By the time we communicated to employees on Sat afternoon, there were 400 cases in the US. (I wrote about this time here: https://twitter.com/stewart/status/1237815458386055178)

March 9th-13th. Earnings week
Monday: Trading halts six minutes after markets open on a 7% drop in the S&P 500. Everyone learns that the markets have circuit breakers built in. VIX spikes to highest since Oct ’08. Suddenly the macro environment seems dizzyingly uncertain.

We regroup, revise the script and adjust guidance as the CEO/CFO/IR/Comms crew heads to NYC. Driver from the airport tells me business is down by half, he’s behind on rent and his brother just got laid off from his hotel job, along with 50% of the staff. Darkening clouds. 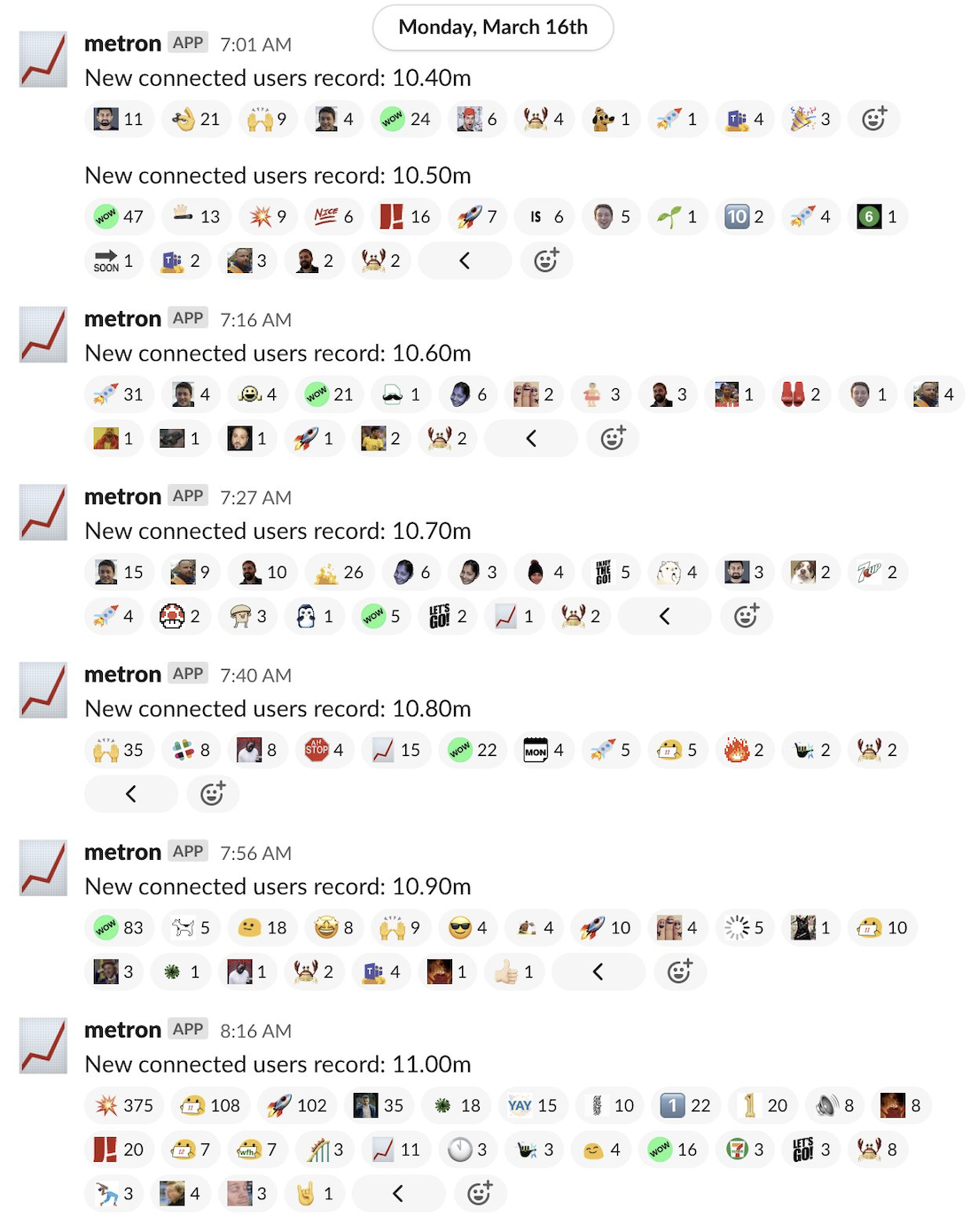 Markets bounce back that morning, but there’s a lot of noise. In Italy, new “returning teams” (important internal metric) were up more than 120%. Japan & Korea, already way up, increased another 34% & 33% W-o-W respectively. At the same time, more layoffs and businesses closing.

Wednesday: Prep sessions for media interviews & earnings call. WHO officially announces it’s a pandemic (?) and, with another 5% drop in the major indices, we’re also officially in a bear market. Practice questions get weirder and more off the wall. (We have a great team!)

Quick drink/snack with friends on the way home ends up being my last time in a restaurant. Then, all at once, it got *real* in America: Tom Hanks & Rita Wilson diagnosed, NBA suspends season, Trump announces travel ban. Futures trading halted on limit down

Just after 10pm, the CFO, GC & VP IR and I are discussing. Inside of an hour we go from “the last 24 hours of activity does not warrant any further conservatism” to “we need to adjust guidance one more time.” In the next 24 hours we would be asked about this dozens of times.

Thursday. Earnings day. Major indices plunge again. Prices fly all over the map as 10%+ intraday volatility becomes the new normal. Back in San Francisco, total school closures are announced (which is both the right thing and a very, very big deal for parents working from home).

The whole company was energized and moving fast. All hands on deck as existing customers accelerated rollout plans and new team creation continued to increase. But we could tell anxieties were also increasing. Leaders across the company stepped up internal communication. I wrote: 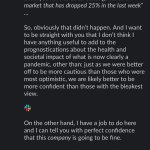 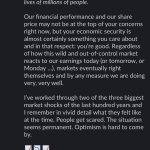 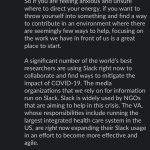 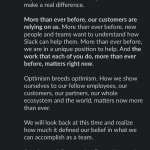 That afternoon, waiting for the earnings to print and the call to start, felt completely surreal. This was our third earnings as a public company. The first was a point, the second made a line, and this one made it a curve. But that’s all normal world stuff. Here was crazy.

When the possibility of millions of deaths is slowly starting to sink in, it’s hard to say an otherwise normal CEO thing like “the macro environment is creating significant tailwinds for the business” and it felt completely impossible to extrapolate out from this present moment. 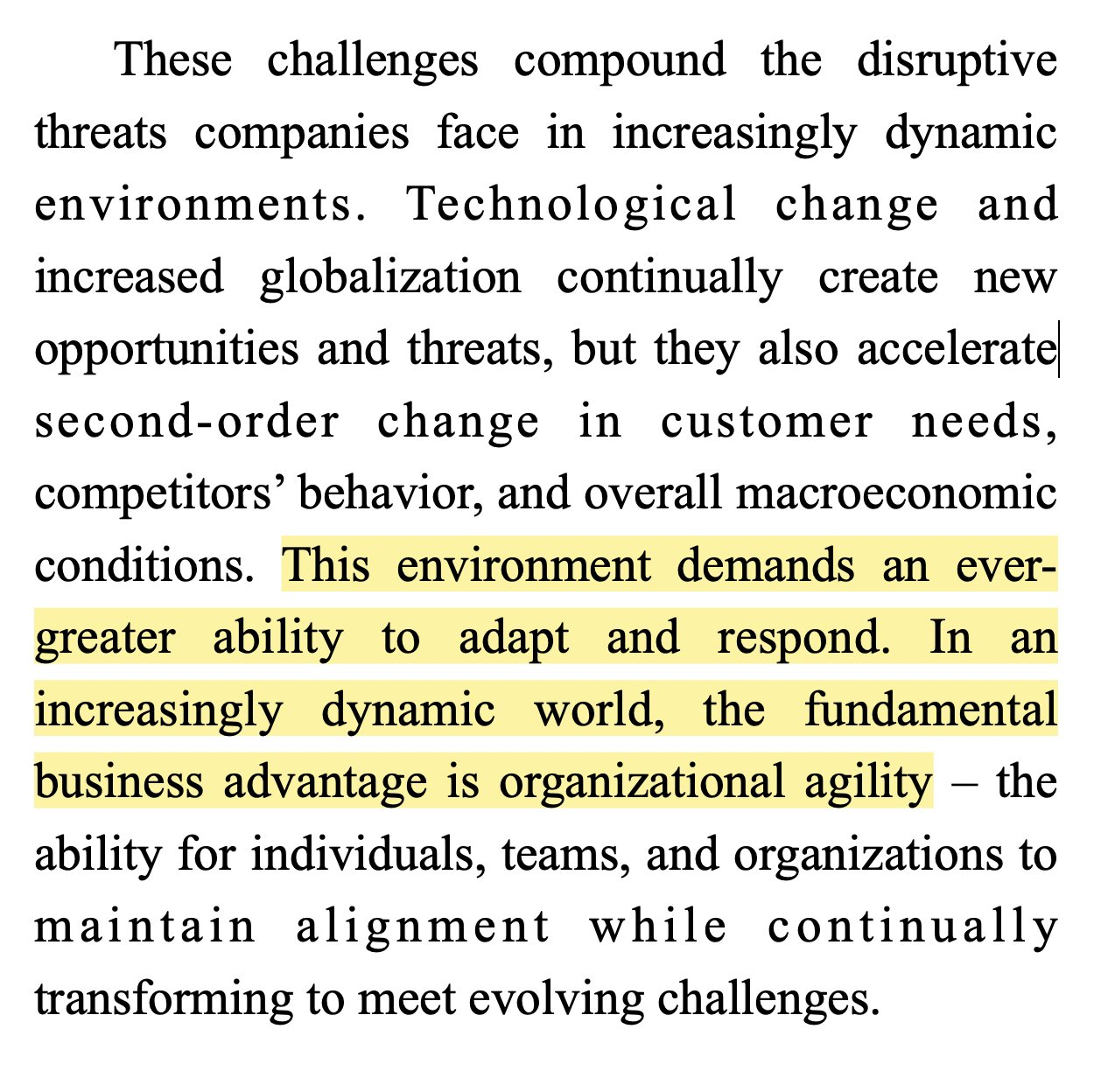 It felt like the shift from inboxes to channels which we believed to be inevitable over 5-7 years just got fast-forwarded by 18 months. Good for our business. But what about everyone else? Many sectors were already hit hard and the fallout for small business could be devastating.

Looking back, things looked good. Full year revenue up 57%; Q4 revenue up 49% and billings 47%. We believed we were finally through some organizational growing pains and were better positioned than ever. The competitive narrative was clearing up as we kept winning in enterprise.

And now we saw evidence of a huge increase in demand. This was March 12, so the ultimate impact wasn’t yet clear. But we could see it in, e.g., this chart of newly created “work teams”. (The first chart from March 12. For context, same chart but four days and 11 days later.) 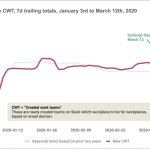 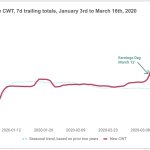 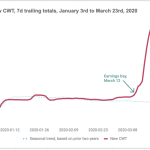 So, on one hand:
Large enterprises were sure to clamp down on spending, our EBCs were closed, salespeople couldn’t travel, no in-person meetings for training programs, and more we couldn’t yet imagine.

And on the other:
Those same customers needed Slack more than ever.

At the other end of the spectrum it was:
Early signs of a surge in teams created and new paid customers unlike anything we had ever seen.

Weighed against:
We had 110,000 customers. In the worst case scenarios many thousands of those would go out of business.

When I think about the future, I imagine a “cone of possibilities.” The further out you get, the harder it is to predict and the wider the cone gets. Increased risk, volatility, uncertainty push it wider still. Our job in this moment is to help others predict our future. Hmm.

We want to be “reasonable” and “prudent” and earn the trust of analysts and investors over time by being honest and straightforward.

But we literally have no idea what is going to happen and neither does anyone else, really. The error bars on any prediction will be miles wide.

One thing we can say is that averaging out the best and the worst case to draw a line down the middle doesn’t make any sense. We want to guide to something we know we can achieve, and that means factoring in the downside scenarios more heavily. And that’s what we did.

Eventually the numbers went out, the call started, and we stayed in the office doing callbacks with sell-side analysts till bedtime. The next morning I was up early to do CNBC’s Squawkbox, but this time from a separate studio 7 blocks away. Visitors were no longer allowed.

That was Friday the 13th. Since then, I’m not sure how to characterize what’s been happening other than just “more.”

The news is worse and worse. The pandemic spread further into France and Spain. Lockdowns started across the US. Several realities are starting to sink in.

The adrenaline we ran on for the first two weeks of everyone working from home is starting to wear off. It still feels great to be able to help and for us, right now, locked inside, work is an opportunity to genuinely help. But, also: we’re locked inside. People are more scared. 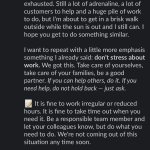 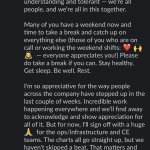 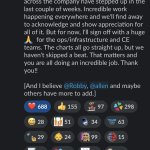 At this point millions have lost their jobs. Others have jobs but are forced to put themselves at risk. Those of us fortunate enough to have a job they can do at home are not really set up for “remote work.” There’s a pandemic: schools closed, no childcare, families separated.

For us as a company, however, the shift is dramatic. In each of Q3 and Q4, we added around 5,000 net new paid customers.

Meanwhile, existing customers are expanding. Enterprise deals are getting done. More new teams are signing up. More upgrading to paid plans. And the intensity of usage is also increasing: people are spending more time in Slack. Average messages sent per day per user is up 20%.

Through it all, with average active usage surging past a billion minutes each weekday, our customer experience team has kept pace beautifully. Network ops & infrastructure engineers deserve huge credit for 99.999% uptime through absolutely unprecedented growth.

There’s a lot more to the story, but I’m already using way more than my daily allotment of tweets and I don’t want others to have to go quiet. So for now: If you’re a customer trying to scale up or get through this, we’ve got you. We genuinely want to be of service. Call on us.

If you’re an employee reading this, I want you to know that what we got done in the last few weeks is incredible, and unlike anything I’ve ever seen in my life. I’m so, so proud of all of you. And, please, for real: take time out/off. Take care of your family and your health.

If you’re just getting started on Slack, I’m sorry: there are still some rough spots. It’s not as easy to get used to as we’d like. But we’re working hard to simplify and guide people towards effective usage. It’s worth the effort. When it works, you’ll never go back to email.

And if you’re on the frontlines fighting COVID-19, we will do anything we can. Use it for free, ask us for advice. Email covid@slack.com. We are profoundly grateful for all you are doing.