David Chang swears he has no idea what he’s doing. He repeats it, somewhat unconvincingly, during a fireside chat with Slack CEO Stewart Butterfield at Frontiers in New York City.

But if massive success can occasionally be written off as a happy accident, Chang’s accolades are far too extensive to ever be discounted as dumb luck. His renowned tasting-menu restaurant, Ko, has won two Michelin stars; he’s a New York Times best-selling author; and he’s notorious for breaking the cardinal rules other chefs won’t touch (including giving guests the boot).

Chang has earned a reputation as the bad boy of ramen, but onstage there’s barely a flicker of bravado. Instead, he doles out life advice that spans topics ranging from executive coaching to the creativity conundrum posed by his famed steamed buns. To hear such wisdom makes it clear how Momofuku has become a household name, why his show Ugly Delicious is a Netflix sensation, and why his food is just so darn good.

Nab early bird discounts for Frontiers before they're gone. All workshops, sessions, speakers, and parties included.

Failure is the secret ingredient

“I think you learn by screwing it up,” Chang says. “It’s the height of stupidity to think everything is going to work according to plan.” Even the safest options fail.

He runs through the list of compromises he made when he and his team first opened Momofuku: Everything on the menu was born of necessity. He didn’t want an open kitchen or minimal decorations, but the group had leveraged everything they had and it was all they could afford.

“I think you learn by screwing it up.”

“We only had three months of savings left and realized we were going out of business,” he says. “You’re so busy trying to run a restaurant, you forget about creating, you forget about goals; it’s about survival.” And so, in what he and his team thought would be their final 90 days, they threw out the rulebook. They got rid of vegetarian options, started ejecting customers, and didn’t let guests make substitutions. “We did things that should never have worked, and ultimately that’s why it worked,” he says. “If that doesn’t happen, I’m not here today.” 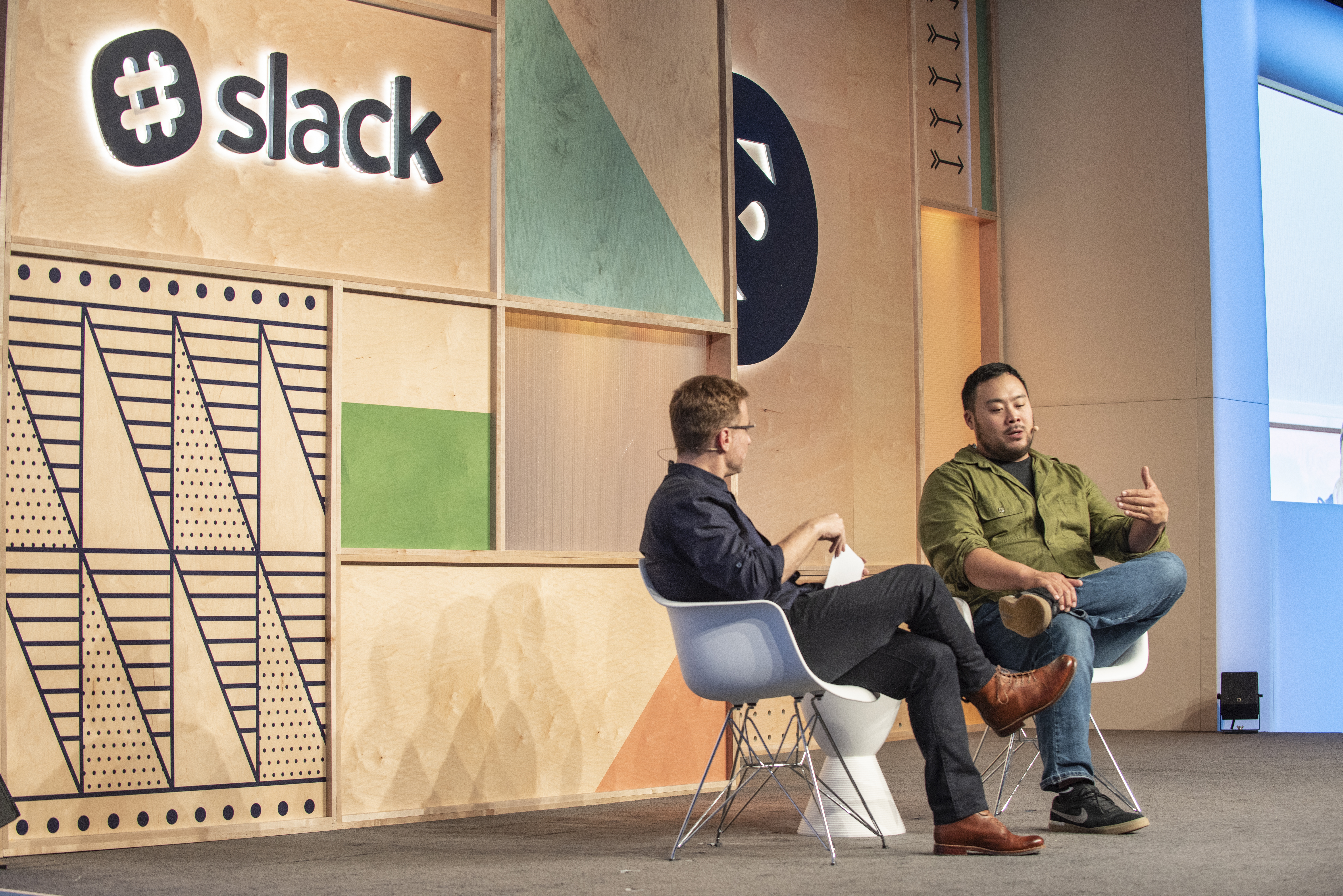 Now, as a celebrity chef, he recognizes that his likelihood of failure is smaller than ever, which affords him the ability to take risks his peers might avoid. That includes opening a restaurant in a raw, rarely frequented LA neighborhood and assembling a new team from scratch. “It just felt so raw and like such a bad idea—that’s when I knew I had to do it,” he says. “The odds were so stacked against us that the only way to make it work was to make it awesome.”

As the Momofuku brand and restaurant group has grown, Chang finds himself in a surprising position: He’s the CEO of a business with more than 1,000 employees. “I got into this profession so I didn’t have to talk to people,” he recounts. “Now that’s pretty much all I do.”

That’s come with plenty of growing pains, Chang says—including an excruciating executive coaching session. The session revealed that employees were afraid to talk to him and that his temper stressed people out. “I’ve had to grow up a lot along the way and mature and professionalize.”

Now, when he sees a failure in the kitchen, he tries to help his employees learn from it, but withholding judgment and communicating more clearly is a daily struggle. “I know what I’m inclined to do, and I have to fight tooth and nail to not do it,” Chang says. “When they make a mistake, be patient. Let it unfold. A good leader is probably like being the best kind of parent you can imagine.”

As an expectant father himself, the analogy is top of mind. He wrestles with the characteristics of an ideal parent, chief among them to be present and to enable children to make their own decisions.

These same qualities apply in the kitchen, where many chefs are as young as teenaged. “Not only are we going to teach them to be better cooks, we’re going to align them to be better people. More responsible. Better custodians of everything,” he says. “That’s not a responsibility I take lightly.”

The signature-dish dilemma (or, why you won’t find steamed buns at CCDC Momofuku)

William Faulkner is thought to have said, “In writing, you must kill your darlings.” Chang feels the same way about signature dishes—which is why CCDC Momofuku, his sole Washington, D.C., restaurant, doesn’t have any of his world-famous ramen or steamed buns.

“Having signature dishes is a blessing and a curse,” he explains. Part of the problem is that changing a beloved menu item almost always results in negative feedback and unhappy customers. But in not experimenting, he says, you’re stuck in the past. “Signature dishes prevent you from growth.”

To combat this, other restaurants change their menu anywhere from annually to as often as three times a season. Chang admires that—from a distance. “It’s hard for my team to even comprehend. We’re never going to do that… It’s a real morale booster for the staff, but it’s also difficult. You can burn people out.”

Instead, Chang hired chef Tae Strain to completely dismantle the menu. The ramen and steamed buns are gone, and Chang knows that getting rid of these items is a bit indulgent.

He reflects on it for a moment and then adds, ”I think it’s a balance of both, personally.”

The final stop for Frontiers 2018 is coming up quick. Sign up now to catch us in London on November 13 and 14.

Nic Vargus has never been kicked out of Momofuku.