Karen Wickre seems to know everyone, and she’s happy to tell you all about how she got so connected. As a former editorial director at Twitter, she knows a thing or two about telling a compelling story. And as an early employee of Google, where she worked for nearly a decade on the communications team, she got a chance to be in the mix as the company exploded in growth and essentially took over the world. Now her new book on networking tips, Taking the Work Out of Networking: An Introvert’s Guide to Making Connections That Count, is out and it’s a fount of knowledge about how to make networking work for you.

This isn’t another guide to pushing for handshakes and business cards, nor is it filled with networking tips on how to work a crowded room to your advantage. Instead, the book reframes networking in an era of ubiquitous social media and in an environment of people changing jobs much more frequently. It’s a fresh look at something important to our careers that many people fear, and the book is chock-a-block with insights.

Recently we sat down with Wickre to talk about the sage advice in her book, what networking means in this day and age, and how everyone can improve at it, even if they dread it.

Matt Haughey: This book made me rethink networking, and your premise makes sense—if you’re a decent person to those around you, you’ll slowly amass a network of coworkers and friends in an organic, unforced way. Have we historically defined networking too narrowly?

Karen Wickre: Yes, we have, and we also thought networking was an end in itself. Networking is a function in service of making connections, right? It’s not a standalone activity like, “Well, he’s out networking. Good haul today.” That’s not the point. It’s more about if you can have a good network, but you didn’t get it by “networking.” People do hate that association with it being transactional.

We all benefit from [those connections] at different times, when we have different needs. No one person comes with a gift-wrapped package with the whole answer, or the whole solution, the job offer, whatever it is. You have to piece these things together. That’s why it’s an ongoing journey.

MH: A lot of the book is really about job seeking. Do you think that’s from having a freelancer mindset with which you’re always looking out for the next gig, or is thinking about our next job something we should do all the time?

KW: I do think we should always be on the lookout. A lot of people are looking for new opportunities. It wasn’t me being a freelancer so much as I was at Google fairly early on, when it was super hot and getting a million résumés a year. Because I already had a lot of contacts, people would reach [out to] me constantly to say, “I already applied, can you help me. How do I get in?” I had dozens and dozens of exchanges with people over phone, email, and in person. Today, LinkedIn is so much part of the fabric of how people do that.

Also—this is why people panic and hate networking—they don’t think about it until suddenly their job goes away, or they don’t like the direction of the company, or the new CEO seems terrible.

They want to make a change. Then they’re like, “Now I have to network.” That’s not a good mindset for doing it.

So if you have your virtual posse, your brain trust, then you can say, “OK, it’s happened. I have to find something, and I want to go in this direction, who do you know that does X, or wants this kind of skill, or who can I talk to at this company.” That’s where having this muscle memory about being in touch with people really helps, so you don’t panic.

MH: What do you think non-introverts would get out of reading these networking tips? It’s a great advice book, period, but I was drawn to it because the title resonated with me.

KW: Let me point out a subtlety of the title. It’s not the so-and-so guide for introverts. It’s from the point of view of an introvert, but it’s for everybody.

Everybody says they hate networking, but everyone can benefit from connecting with people in more authentic ways.

Being able to go to the well every now and again, when you need advice, and help, and so on, for more than jobs, that’s for extroverts too. People tell me they may be extroverted, but they don’t know the protocols of meeting and connecting with people, and staying in touch with them is foreign to them as well. In other words, as the publisher would say, it’s for everybody.

MH: You talk about introversion as an advantage in the book, how all the natural attributes of an introvert are beneficial in this realm. Can you explain that?

KW: There are three key things. One is simply that introverts are better listeners because we don’t like to talk first. We want other people to reveal themselves before we commit. When you’re a good listener, you learn a lot about people. You draw them out. Terry Gross recently said the magic question is, “Tell me about yourself.” If I’m meeting someone and I don’t know why we’re meeting, that’s how I begin. Listening is an awesome skill anyway. It’s not the same as waiting for your turn to talk—it’s actually paying attention to what someone says.

Going along with that, in a more visual and intuitive sense, the second key thing is observing people and behavior. Is someone nervous? Are they fidgety? How do they roll? What makes them go? I notice this a lot in job interviews. For example, if they’re jokey, they probably want to put you at ease. These are more clues about somebody that can help you understand them.

The third one is simply just being curious. I don’t know that this is specifically a trait of introverts. Being curious means defaulting to, “Yes, why not meet someone, why not take the introduction or have a conversation.” Not with everyone you come across every day, and not to fill up your calendar—just to be curious about people. I often hear fantastic stories that make me feel more empathetic, and I want to help whoever it is—if they need help—or I remember a memorable character who might be a good board member or perfect for some freelance project.

MH: How does networking work when you have a job you like and not looking? Or, when you’re at a very large company, is networking still a skill to practice?

KW: It’s important to connect with people in your company who aren’t on your team. To have a brain trust of people to talk to about what’s going on, and how their work fits with what you do. It has the added benefit of occasionally being able to say, “Oh, that’s launching tomorrow? Does legal know about that? Has that been checked? Security, are they up on that too?”

When you know who the decision makers are, it can help avert emergencies.

I learned to do this intrateam connecting at Google. I was on the communications team, which had a pretty broad purview of the company. Knowing people on other teams, understanding how they work, how they think, becomes really invaluable. It’s good later too, because everyone from these teams is going to move on.

MH: You share a great deal of advice about LinkedIn. I thought, “You know, I should put more than zero effort into LinkedIn, even though I’m not looking for a job.”

KW: I felt the same. For years, LinkedIn for me was all about people who wanted stuff from me. Now it actually has more utility, because people are always looking for a speaker at a conference, or who could be a good board member, something like that. It’s not just for people who are looking for jobs. Besides, everyone looks people up. It’s kind of the de facto directory for industry now. 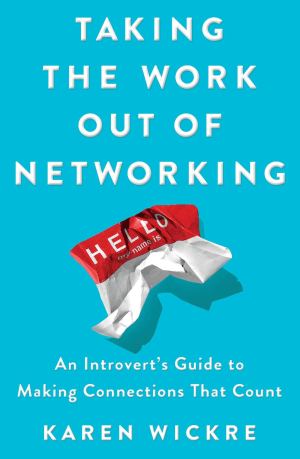 Wickre’s book is loaded with great advice on all angles of networking, but one of its biggest takeaways is this: Nurture your network before you need it. In other words, be helpful and thoughtful and keep connected with lots of people over the course of years so when you are between jobs and seeking new opportunities, your network can step in to help just as much as you’ve helped them, making your job search less of a sudden move of desperation.

Interested in learning more from Wickre? Grab a copy of her new book, Taking the Work Out of Networking.

Whatever work you do, you can do it in Slack. Get the power and alignment you need to do your best work.