We’ve all been there. En route to the airport, but you have to approve your team’s time off before hopping on the plane. Heading to a customer meeting, but you forgot to check the status of their account before you left the office and you’re still waiting on your boss to weigh in. In an increasingly mobile world—with the average user spending three hours a day in mobile—today’s marketplace demands our work tools be flexible and secure enough to move along with us.

Slack does just that, offering people the flexibility to collaborate when and how they choose. As my colleague Brian Elliott said in his recent post, workplace collaboration software is only useful if people actually use it. And with more than 5 billion actions taken in an average workweek it’s clear that people rely on Slack to get work done, which is why we work hard to meet our users wherever they want to work, with a mobile app that extends their workspace anywhere. 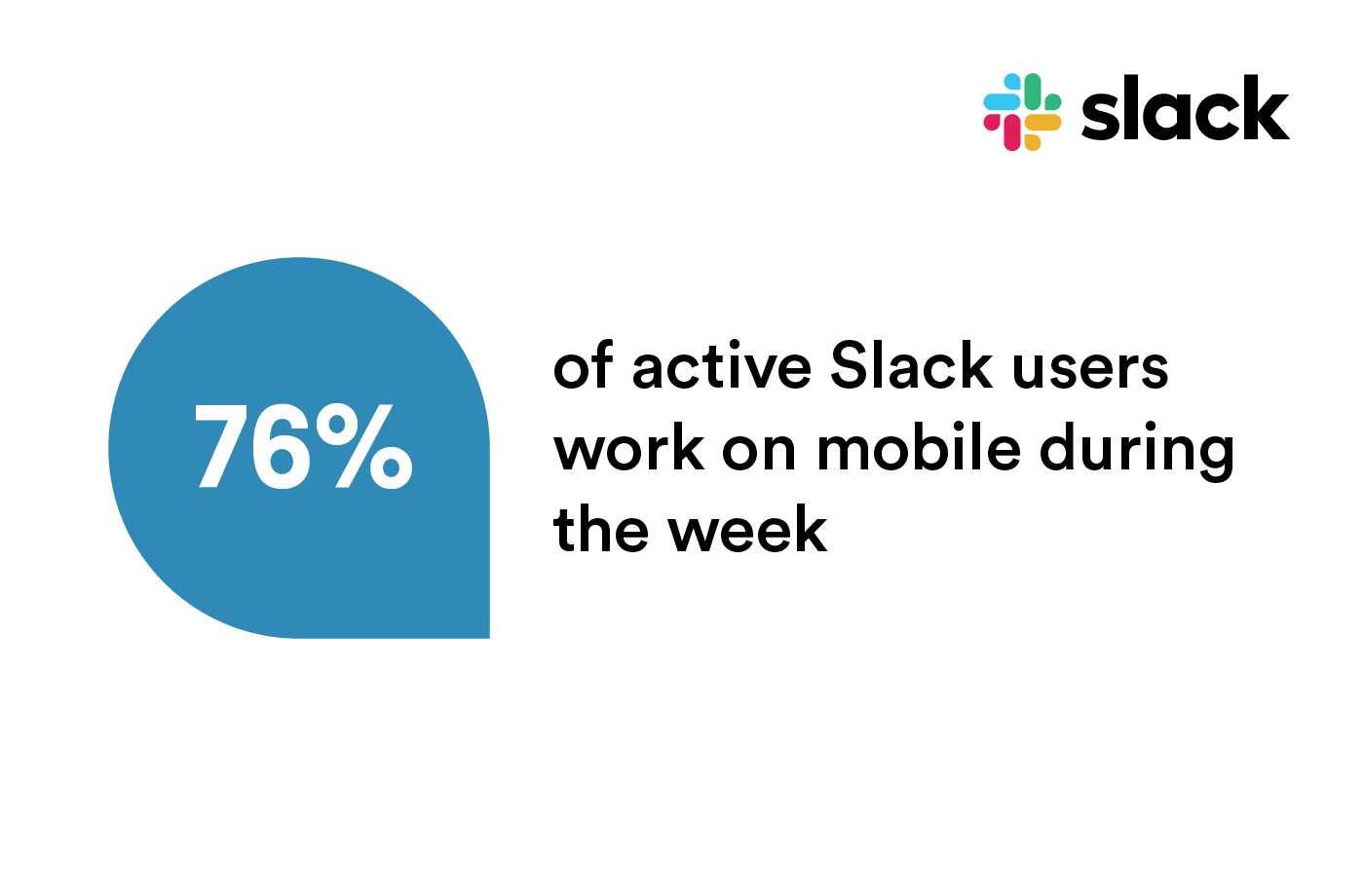 As a result, we’ve seen a corresponding uptick in mobile use on Slack, where we increasingly see people also use Slack’s mobile app as the jumping off point to start their day, or to tie up loose ends when the day is done.

Of the people who actively use Slack during the week, 76% use Slack on their mobile devices through our apps for iOS and Android. And Slack mobile users are highly engaged: Of those 5 billion actions taken in an average workweek, more than 1 billion actions are taken on mobile. We also find that more than 70% of the total messages sent in Slack during a typical workday are sent by users who use mobile-only or a combination of mobile and desktop. 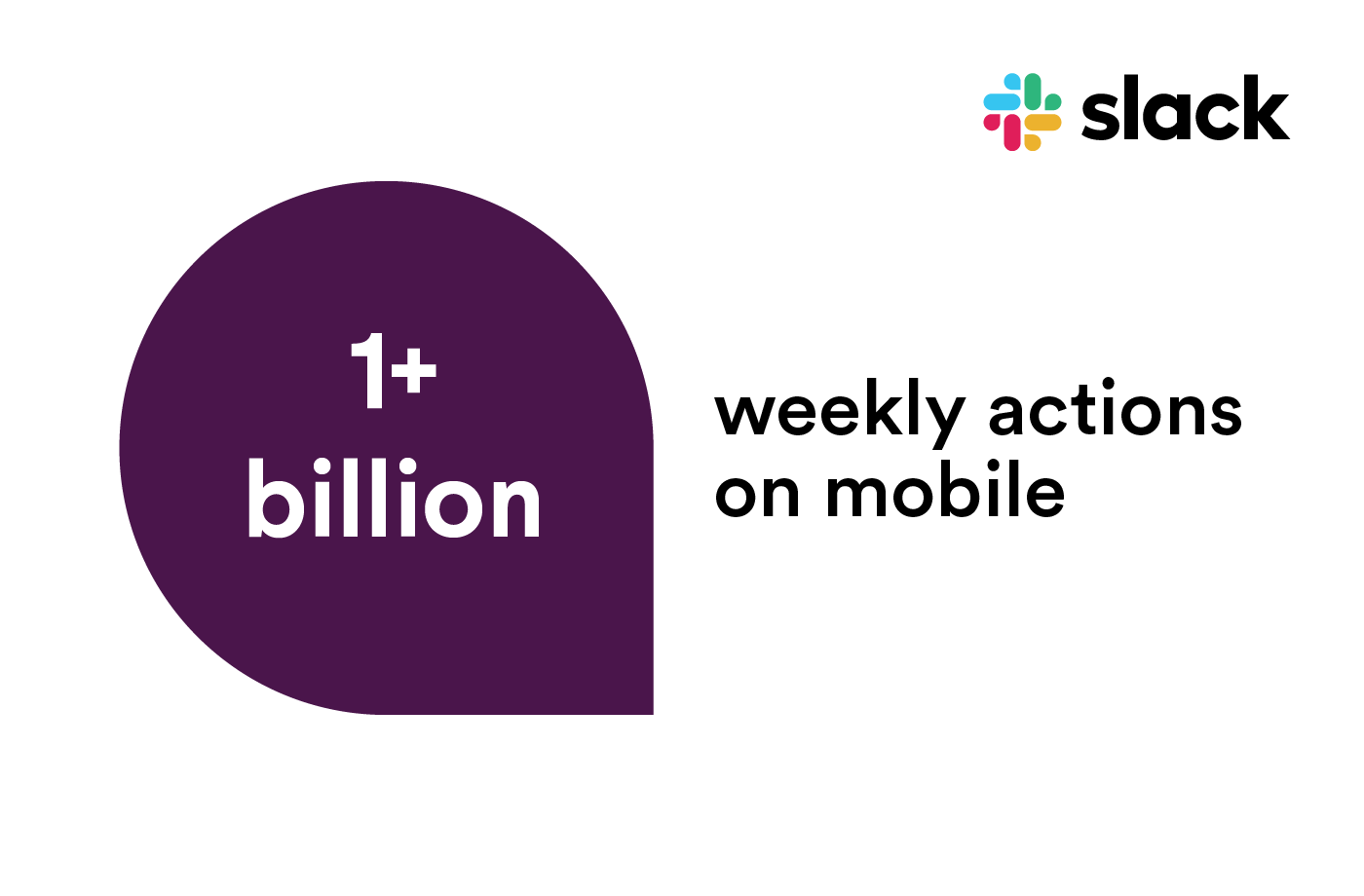 With Slack, you have true choice and flexibility to add the apps that you use every day, no matter the vendor. As such, we have more than 1,800 apps in our App Directory and, in September, more than 500,000 custom apps were used in a typical workweek. These applications fuel real work for our customers in the field. The salesperson on their way to a customer meeting? They can use the new, richer Salesforce for Slack app to easily stay up to date on their Salesforce records from within Slack, even on the go. And that’s only the beginning of what our customers are accomplishing on mobile.

Slack users can do virtually everything on Slack on mobile that they can do on desktop, and their high levels of engagement help make the transition back and forth between the office and the outside world more seamless than ever. From mobile-first customers coordinating front-line workers in the field, to dispersed teams creating their own virtual office space, to moving fast to resolve a crisis—our customers prove that Slack is where work happens, wherever you happen to be.

Coordinating teams in the field

RPI Ambulance, a collegiate medical service based in Troy, New York, custom-designed a mobile Slack app integration to keep its emergency medical services workers on call. By the time the dispatcher’s actual message comes in, the crew members have already opted in on the assignment, know who they’ll be working with, and are en route to the garage. And the entire squad already knows who’s answering the call, so they don’t all show up at once.

“In a field where seconds count quite literally—it could be a matter of life and death—instant notification of emergency calls within Slack has helped our membership respond to incidents,” said Dan Bruce, paramedic and developer at RPI Ambulance.

In addition to running two salons, DevaCurl makes products for curls of all types. Of course, cornering the curly-hair market doesn’t come without challenges. Out of 200 DevaCurl employees, 125 of them are based in the company’s salons. That means over half of its workers are on their feet, interacting with customers, rather than in front of a computer screen. Slack channels—virtual spaces where teams can share messages, tools and files—offer a speedy way to connect these always-on-the-go employees.

“The salon is a completely different space with mostly creative folks who are not sitting in front of a laptop. All they have is their phone,” explains DevaCurl CEO Robert Schaeffler. “With Slack, we were finally able to connect people in an office, people that are remote and people that are on their feet all day long in a salon environment.”

A team at the data software company Splunk developed a Slack app that allows managers to use the command /splunkcapture to pull a readout of a sales engineer’s (SE) dashboard into Slack. With the snapshot, they have a bird’s-eye view of the SE’s opportunities and potential red flags. “Even when they’re on the run—in a hotel, at the airport—they can use the capture command to get on the same page,” says Mike Dupuis, senior manager, sales engineering, strategy and operations, Splunk.

Working remotely could have slowed the SEs down. Instead, they’ve used Slack’s mobile app to speed things up, responding more quickly to customers and using their collective brainpower to demonstrate the value of Splunk no matter where they are.

Making mobile work for you

We increasingly see that users check Slack first thing in the morning and before they sign off at night, so it’s vital to meet them where they are. A rich mobile experience gives our users more flexibility then ever before with when and how they choose to stay connected.

We’ve seen the power this flexibility brings to help our customers be even more productive, but we also know that your work life isn’t—and shouldn’t be—your whole life. That’s why we offer our users granular control over their settings to help disconnect with features like Do Not Disturb and custom status. Even when we enjoy our jobs, no one wants to be “always on”—and by using these tools from Slack, you don’t have to be.

As our customers prove every day, the future of work is mobile—and Slack is here to help. We’re continually adding new features and settings to help our mobile app make your working life easier, while also making it easier for you to disconnect when your workday is done.

For some handy tips and tricks, check out our recent post on how to get more from Slack on mobile.

Of people who actively used Slack during the week in October 2019, an average of 76% used Slack on their mobile devices through Slack’s app for iOS or Android. We define a person who actively used Slack during the week as someone who was a Slack daily active user for four or more days during a consecutive seven day period. We define a daily active user as a user who either created or consumed content in a given 24-hour period on either a free or paid subscription plan.

In October 2019, we saw on average more than 5 billion weekly actions in Slack during a typical work week, of which more than 1 billion weekly actions took place in Slack’s mobile app for iOS or Android. Actions in Slack mean writing messages, reading messages, uploading or commenting in files, performing searches, interacting with an app, or a similar action that indicates active use of Slack.