If you’ve walked out of an executive’s presentation saying, “Let’s go!” there’s a good chance Nancy Duarte and Patti Sanchez were behind the scenes bringing that talk to life. As the CEO and CSO of Duarte, Inc., they help leaders at some of the world’s biggest brands tell stories that motivate their teams toward a better tomorrow—and inspire everyone to participate in that vision.

The inspiration aspect is especially key. Here at Slack, our experience and change management team steers workplace leaders away from an over-reliance on heavy-handed, top-down tactics when introducing our product. Instead, we work with leaders to install a champion network of leaders and peers who can co-design new ways of working and support their teams through a transition.

We recently sat down with Duarte and Sanchez to learn more about what it takes to make change a team effort. Their sage advice covers how to craft a story that motivates, why every leader has a story in them and the necessity of developing empathy for your organization.

Slack: When it comes to creating change, how do you define leadership?

Patti Sanchez: There’s a difference between a leader and a manager. A manager maintains what is; they’re the caretakers. A leader creates what could be—possibilities that people haven’t yet imagined. The best leaders have the creative ability to see something that isn’t yet real and the ability to mobilize people who can make that a reality.

Nancy Duarte: Great leaders are decision-makers, but it doesn’t mean they’re the inventor of the decision. Leaders have a healthy stream of people walking in their office with ideas, and they’re vetting them, approving them and funding them. Great leaders motivate people. They make change feel doable and accomplishable.

Slack: Here at Slack, our customer success team helps leaders with the tall task of digital transformation. What are some examples of movements and change they can learn from?

PS: I’ve lived through several evolutions of technology, from mainframes to mini-computers, to desktops and laptops and then mobile. The technology may be different, but the nature of the change is this: You’re asking people to let go of a way of working that they’re accustomed to, and to try working a new way. That’s scary to people.

You can be a student of any movement that’s important to you, like civil rights, the environment, even cultural movements like Slow Food.

The farm-to-table movement changed how I eat. A group of like-minded people came together and they said, “Things should be different. Our food shouldn’t have to travel so far, and there’s actually really amazing produce near us.” You can learn from the things that have changed your daily life.

Slack: Let’s talk about the role of empathy in organizational change. We all agree it’s important, but what does it actually look like in practice?

ND: The leaders of 15 to 20 years ago would command and control. They were directive in nature. Now, to keep up with competitors and consumer demand, they’ve become agile. Command and control doesn’t work anymore. You have to relinquish some control, and that’s hard for people. Empathy isn’t modeled well by that many leaders, but the more empathetic ones will emerge as the leaders of this century.

Slack: How do you work with leaders to build those empathy muscles?

PS: The smartest leaders start with listening tours: going to where your employees are and having conversations. It’s also really important for any leader, before they communicate, to rehearse and try to anticipate how a message is going to land. Start with overt research. Ask people, “This is a change we’re planning. What do you think? Have we missed anything?”

Then, the more subtle, covert research is a communication advisor sitting down with the leader and saying: “What are the three things you’re going to say in that town hall? I’m going to be the employee who doesn’t agree. We’re going to practice me asking you a question and you responding to that.”

Read the story
Slack: Do you encourage leaders to address the fears and anxieties of a proposed change head-on?

For example, when you communicate your vision, say, “I know some of you are really excited. I also know some of you have reservations. In fact, I spoke with somebody who told me that his biggest worry is his job’s going away. Let me talk to you about that.”

If you don’t address it head-on, people will make up their own answers to the questions you didn’t ask. You can let the story tell itself, or you can tell the story by getting out ahead of it, and I recommend door No. 2.

Slack: What’s the secret to getting people who are hesitant to actually embrace change?

PS: To move people to embrace change, you have to understand that you’re asking them to go on an epic journey. There are monsters we have to fight, no matter what kind of change you’re asking people to embrace. Metaphorically speaking, they’re no different than Luke Skywalker, or Frodo, or Dorothy, or any of the heroes of any movie or book you love.

Those heroes have to grapple with things they didn’t expect. There’s an outer journey, a physical environment they have to move through, and challenges they have to overcome. There’s also an inner journey, and there comes a point at which they start to question themselves and think about turning back. If you understand that to be true in a story, you can understand that the same thing happens to us undergoing change in our work lives.

You have to speak to that person who is doubting themselves, and make them feel like a hero who’s able to overcome. When you help them see themselves as the hero of a grander story, you’re going to give them the greatest gift possible: a new sense of their power and their agency as human beings.

Slack: Storytelling is essential to communicating change, yet not every leader considers themselves a natural storyteller. What’s the easiest way to cultivate this skill?

ND: Every leader should have their basket full of stories. For example, if you’re a founder, then you need to have your origin story. If you aren’t the originator of the company, then you need to convey why you felt called to work there. Those stories give people who come to work for you a reason to believe they’re in the right place.

When employees get out of bed in the morning, they’re making a choice: “Do I still want to keep going into that same employer, or do I want to go somewhere else?” All of that is driven by narrative.

One reason leaders struggle with telling a story is because stories are about overcoming a roadblock. Stories are about needing to change. To tell a really good story, you have to say I tried and I failed and then I tried again. I was dealt this terrible blow and here’s how I overcame it. Life is hard, and storytelling acknowledges that. Not everyone wants to go there. Yet, it’s the most powerful device to build devotion to yourself and devotion to the brand that you’re leading.

PS: I was working with the CEO of a fast-growing platform company who didn’t think of himself as a storyteller. I asked, what stories do you tell here at work? He told me about an employee onboarding event he had spoken at that afternoon. He was giving his spiel about values and an employee asked about how important grit is. He went on to tell this beautiful, dramatic story about his daughter’s soccer team and how they went from the worst team in the league to the best team by the end of the season.

He didn’t think it was an important story, but it helped me understand what grit means to him, how I can learn it from him and why I should be so excited to follow him as a CEO! There are a lot of good reasons he should be telling that story more.

My point is, we live stories. We tell stories to our family, but we don’t think of them as being relevant to our work experience—yet there’s a lesson in every story for the people you’re leading.

Slack: Change isn’t linear, and it’s an ongoing process. At the end of the day, what does successful change look like in your eyes? How can leaders measure a job well done?

PS: To be real, change is a never-ending process. It’s hard to measure your success by the destination. Sure, there are specific things you want accomplished, but the truth is you really are more likely to see progress rather than perfection.

It requires people to change, not just for outcomes to happen. So when I hear somebody say something that shows their mind has shifted, that’s a big win. 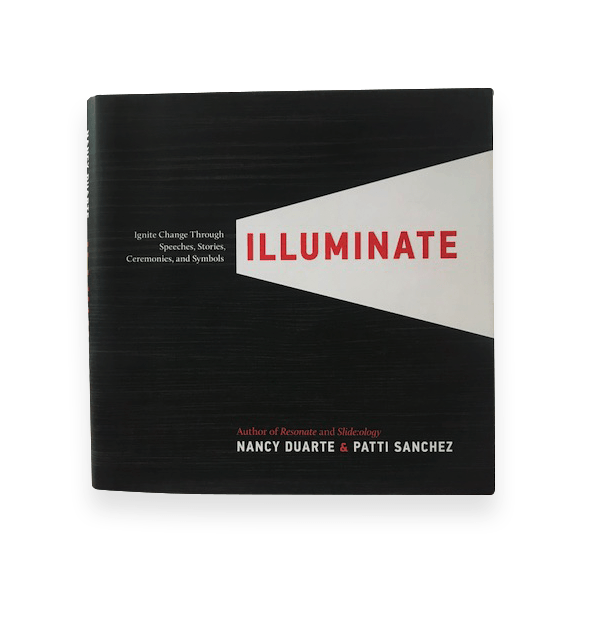 ND: In our book Illuminate, the five steps of communicating change are dream, leap, fight, climb, arrive. As leaders, we need to tell people we’ve arrived. Granted, it’s an ongoing journey but we’ve passed significant milestones, right? If you passed Half Dome at Yosemite, you would pause and reflect. As leaders, right about the time that our sweaty, beaten-up employees have finally arrived, we’ve moved on to the next vista. And we forget they need a moment of reflection. You either arrive or you don’t arrive, and you have to acknowledge both.

You need to tell a story of savoring the win or of learning a lesson. You have to design a ceremony for the sake of the employees, because they won’t jump in the new leg of the journey unless they have closure from the last one.

If Duarte and Sanchez’s advice has motivated you to learn more, check out their book, Illuminate: Ignite Change through Speeches, Stories, Ceremonies, and Symbols.